Under the Pipal Tree – How the story began

April 21, 2017
Most stories begin in childhood. They appear in our first drawings, our childish patter and crucially the make-believe world we weave when playing with dolls, paper airplanes or invisible friends. These are the beginnings of a creative project. As we grow up, life steers us in other practical directions until those first imaginative steps are erased from our consciousness. But if we take time to connect with our creative soul, that world can be recreated with simple tools: paper and pen.

Writers are usually avid readers and it’s a great place to start. Books feed our imagination, teach us our craft, inspire and uplift. But some books take us further when the characters leap out of the pages and populate our world, hovering over us like invisible, benign spirits like Shakespeare’s Hamlet or Moliere’s Alceste. Some like Meursault in The Outsider can have a lasting effect on a young reader’s mind. When I first read the novel at the age of fourteen, the emotional detachment of this character and his actions, contrary to social conventions and the law, had me fascinated. That the person who had committed a grievous crime could be the protagonist, made me realise how powerful stories can be.

But what about the power of stories we tell each other? What secrets lurk in bedtime stories?
I explore this in my debut novel Under the Pipal Tree published by Cinnamon Press. This story began a long time ago, in my childhood dreams to be a writer.

'Sometimes when the night is still and all is quiet Rohini can hear Maria’s voice singing to her in the dark, across the vast plains to her home by the Arabian Sea.
So many stories Maria had told her, which ones were real?’
Set in India, Under the Pipal Tree is essentially a novel about relationships. The story is told from the point of view of two women, Rohini and Maria, and is set in two timelines.

In the present, Rohini, a wealthy woman in Mumbai, discovers a family secret that turns her cosy, suburban world upside down. Suffering quietly from depression, Rohini is encouraged by her doctor husband to seek the help of a psychiatrist but she is afraid to be the subject of gossip in the close- knit Bengali community in Mumbai. Depression is still not a subject people are comfortable with. Besides, she is a teacher and a whiff of mental illness might jeopordise her career. But when she meets Dr. Bose, she is reassured by his calm manner and over time she learns to trust him, even lean on him for support when the world she had always known begins to slip away from her grasp.

In 1966 Rajgarh, Maria is a young lady who works for the Bannerjee family and becomes a trusted companion of Indira. The worlds of the two young ladies could not be more different. Maria grew up in a slum and Indira lives in a big house in an affluent part of town. But the two share a bond of friendship that will see them through tumultuous events. However, their friendship is tested when Maria asks Indira for a favour, one that will indebt her to Indira for life. They make a secret pact under a pipal tree in the village. The priest seeing the two in conversation tells them that it is under such a sacred fig tree that Buddha had found enlightenment.

Back in the present, Rohini struggles with the unpalatable truth. Everything she had ever believed must be questioned, examined and replaced. As Rohini is helped on her journey by the faithful Dr. Bose, her mother Indira and childhood nanny Maria urge her to move towards acceptance. Rohini is a staunch Hindu, Indira an atheist and Maria a devout Catholic. Divided by faith and haunted by secrets the three work hard to rebuild their relationship. Together they redraw the boundaries between each other and their world.

A domestic novel at heart it asks globally relevant questions. Are we tied by biological links or social? Is mental illness still a taboo subject? What effect does religion, social class and prejudice have on people? Do they unite or divide? Do they define us?

India provides the raw backdrop of this story – colourful, confusing and utterly compelling.

Under the Pipal was shortlisted in the Yeovil Literary Competition 2014 and won the Cinnamon Press La Debut novel of the Year 2015.

Under the Pipal Tree is available on all Amazon websites as Kindle and paperback versions.

You can also obtain a copy from the Cinnamon Press online shop:

Popular posts from this blog 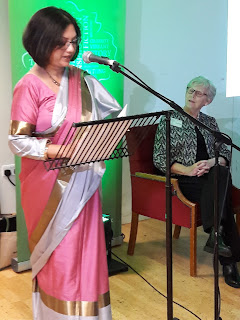 In 2014 the first raw draft of Under the Pipal Tree was shortlisted in the Yeovil International Literary Competition. Buoyed by this validation, I banished self-doubt and set to work on the novel. A year of intense revisions and six drafts later it won the Cinnamon Press Debut Novel of the Year 2015 and a publishing contract. When I informed Liz Pike, Yeovil Literary festival’s charming organiser, about my success, she remembered my story and invited me to talk about my novel at the Past Winners’ Event. I felt privileged to talk about my writing journey from first draft to publication.
The events kicked off with a literary dinner where the guest speaker was the lovable Christopher Biggins known fondly as Biggins. Unsurprisingly, he regaled us with his adventures. He has chronicled his life in his memoir, My Story.


At the Past Winners' Event four writers were invited to read out extracts from their winning piece of work. The air was charged with creativity as each read out moving p…
Read more 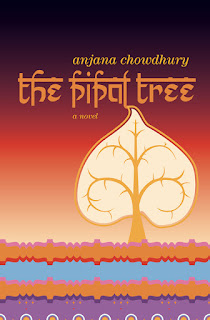